Where My Journey Started and Where It’s Going 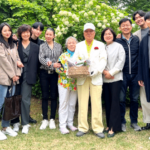 Watching a recent TV show “Pachinko,” I was truly impressed by how the directors used screen arts and music.  Based on the New York Times bestseller, this show chronicles the hopes and dreams of a Korean immigrant family across four generations as they leave their homeland in an indomitable quest to survive. It was relatable and magical and wonderful to see how they focused on how three generations of a family dealt with biggest challenges of their times. After watching the first season,  I couldn’t help thinking about my parents and my own family here in U.S.

My dad was born in mid 1930’s from the Southern region of Korea, when Korea was still under Japanese colonial territory. His family endured a lot of hardships, loss and scary moments because they had to survive through the Korean War. In fact, one of his stories that he tells often is about how, when he was just 12-years old, he and his brother escaped a massacre that happened at their small town.

Photo: My dad when he was in army building peace house near DMZ in 1960s.

Like most of the community, my dad’s family was very poor and couldn’t afford to have “normal” food. Young children were living on eating dregs from the liquor factory in the town.

The poverty, however, couldn’t stop my dad from learning and advancing . Eventually he went to naval academy and had a successful career where he then retired as an Army Corporal. He said he was the first person to ‘escape’ the poor rural town and successfully landed a job in Seoul, the capital of South Korea. He later oversaw the building of Panmunjom in 1965 – buildings in Joint Security Area near DMZ – a very famous landmark that you might even remember from when President Trump met with Kim Jong-un a few years ago.

My dad endured a lot in his life but what always stayed strong was his drive to survive and succeed, which is what he instilled in me.

In August 1999, I landed at New York’s JFK airport with one big luggage (called ‘E-Min Gah Bang’, meaning ‘immigration bag’) and two large carton boxes. My destination was somewhere in Brooklyn, where I was supposed to start attending Brooklyn Polytech for a graduate study. Sometimes, when I look back,  I am not sure how I did it.  I didn’t have any friends. I didn’t know the language well and I didn’t really know the country itself.

If I’m honest, it was a little scary, but my heart was filled with excitement. I would survive and succeed – just like my dad did. I could learn anything and become what I wanted. (Also, I still can’t forget the taste of Junior’s Cheesecake – where my roommate took me to celebrate my first night in the US.)

I was truly lucky that I got so much help from many people, as for one I  got to join a research lab for Professor Ramesh Karri, where his team was implementing AES candidates into circuits. I implemented the Rijndael algorithm, which was selected as ‘the standard’ in 2000. This experience later led to a job opportunity at IBM Poughkeepsie where designed the first AES engine in hardware format within the company.

When I visited Korea after I got the job offer, my dad was proud of me. He reflected how me going to New York was the same as him leaving the small town he grew up. I didn’t realize much at the time what it means leaving families and going abroad for my own goals. I was just happy about the fact that I made my parents proud for the small success I could achieve. Thinking back now, my generation was still in this ‘make your parents proud’ lifestyle – it seemed very common in many Asian cultured families.

More than 20 years have passed since my first day at work. I have been through different jobs and different companies.  I got married and have my own family now. When my children were born and as they grew older, I had to face something that I didn’t realize I was going to miss.

I am the youngest of four siblings – so I never felt lonely growing up. We always had extended family members visiting during holidays and had big family events like weddings and New Years parties. Now, with my children in New York and far from my family in Korea, I am a little sad that I can’t give them the festive feelings and experiences that I was given. My wife and I celebrate with them as best we can but it is a little different when it’s a small family of four compared to an extended family with lots of cousins, aunts, uncles and grandparents.

This is why, I am taking my kids to Korea this summer. It’s a little challenging as COVID is still a bad situation there but this will be a short trip. I hope I can give some of those ‘extended family’ memories to my kids as we visit with family.

Although I chose this career path and I love it – I don’t think I had enough thoughts about what my (and my own family’s) life would be like if I live abroad. I don’t regret on any of my choices – I rather feel I am truly blessed. However, growing up with the culture where ‘Hyo(filial duty)’ is one of the most important virtue in Korea – I am not doing it right as I can’t live near my parents and help them when they needed me.

I think many Asian cultures have this deep rooted family foundation in which the children take care of the parents when they get older. But for those of us who dreamed big and moved out of the countries we grew up in to search for a new life, an opportunity to build a better life, this is hard.

Yesterday I was talking to my mom and she told me my dad fell on the steps outdoor and hurt his leg. I wished I could run back to their house and help him visit a doctor’s office – but I can’t.  All I could do was make a few phone calls.

These thoughts and feelings never came up when I was younger. They were probably planted in my heart long ago when I was a still kid – but it took more than 30 years to grow and finally bloom into a more mature, grown-up heart.

Recent photo of my family

Photo: Recent photo of my family

Now, I wonder how my kids will feel when they get to my age. How will they feel growing up in America as second generation Asian American immigrants? Will they fit in here? Will they want to know more of their Korean family?

I will probably never understand their feelings – but I hope they ask me their own questions about life as they grow up. I hope they remember all of the short visits to Korea and remember where their parents came from. I hope they aspire to visit Korea themselves someday with their families. It makes me smile thinking about these things. I think I am getting old now… I am thankful that we all are in this journey together.

My journey started with my dad in a small town in Korea and continued when I put roots down in Brooklyn. I can’t wait to see what happens next.

The post Where My Journey Started and Where It’s Going appeared first on Linux Foundation.

The post Where My Journey Started and Where It’s Going appeared first on Linux.com.