There are a lot of information-gathering tools in Kali Linux. In this tutorial, we will learn specifically about web application information gathering such as Whois, Whatweb, NSLookup, and CMSeek. Those tools are open-source and already pre-installed in Kali Linux. If you do not have Kali Linux, you could download or check those tools projects at GitHub. Links will be provided in each tool section below.

We will learn the following topics in detail:

Before a penetration tester conducts information gathering, they first define the target. Different target categories use different techniques and proper tools. For example, if your target is a wireless network, any techniques used in gathering information about web applications may not be applied.

WHOIS is a TCP-based transaction-oriented query and response protocol that is widely used to provide information about the ownership of the domain name such as registration date or domain creation date and expiration date, name servers, and registrant contact information (address, phone, and mail). Some of the domain registrar providers or companies might offer a service to hide registrant information.

Let us take a look at Whois command usage in the Kali Linux terminal below: 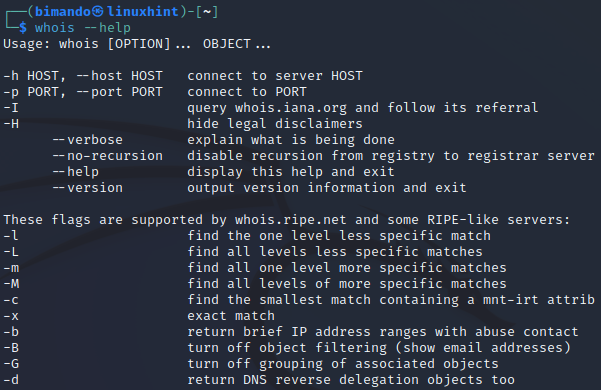 You can add ‘–verbose’ to the end of the command to display more detailed information. Remember to type [domain-name] without the protocol type, neither HTTP nor HTTPS. For example,

The example below is the domain information output using whois that is publicly open, we are going to run it on amartha.com. 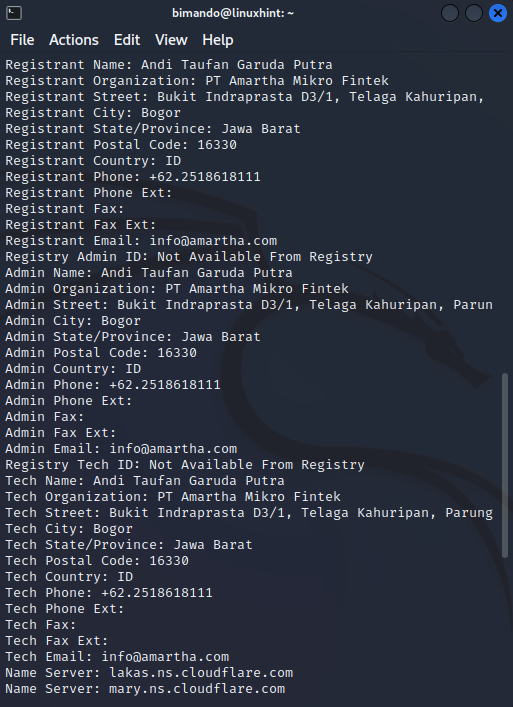 As shown above, we could gain so much detailed information about domain name ownership of amartha.com such as the creation date, registrant name, address, phone number, and email address.

To save the information from the terminal output or text file you can add an output redirection operator (‘>>’) followed by the file name and type. Using this operator at the end of every command means that any output which is meant to be displayed on the terminal will also be saved to a text file.

Now, take a look at how the domain name registrant is using a private service to display their Whois information. For this example, let us check linuxhint.com. 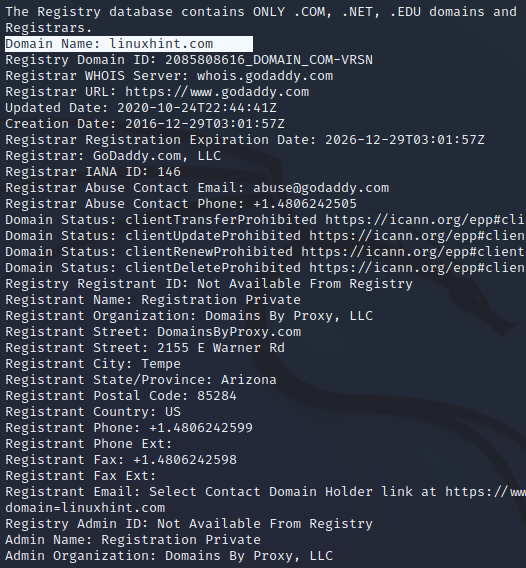 From the output above, Whois tells us that the linuxhint.com registrant name is protected or hidden using a private service.

NSlookup short for Name Server Lookup is a network administration tool to query internet domain name system details such as IP address record, MX record (mailing server), Name Servers, SOA record (start of authority), and TXT record. NSLookup is a standard program for every operating system. NSLookup also comes with an online version. There are so many websites that provide an NSLookup program.

NSlookup interactive mode is activated when you run NSlookup without any argument supplied.

Find the IP address of the domain name, just input the hostname or domain name. 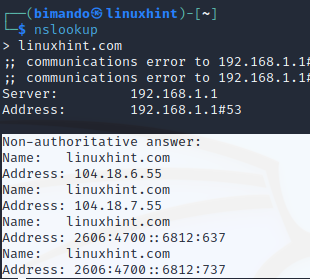 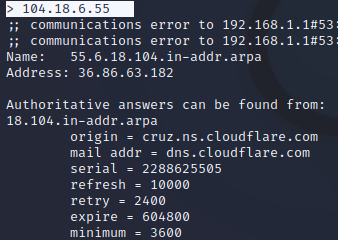 From the information above, It is clear that linuxhint.com is behind a firewall service, Cloudflare.

Enumerate the MX records (the mail servers that are responsible for managing incoming email messages on behalf of a recipient’s domain), by adding the following argument before inputting the domain name. 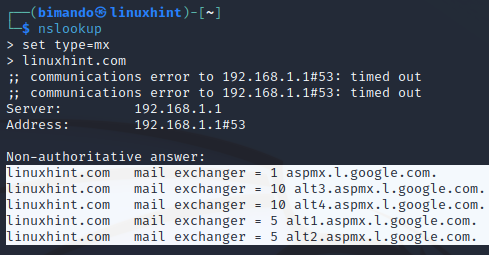 Enumerate the NS records, by adding the following argument before inputting the domain name.

The non-interactive mode is activated when you specify the query for what record you are looking for. For example:

Enumerate the SOA record (start of authority) this record stores authoritative information about a domain or zone such as the email address of the administrator, the recent domain being updated, and the time between refreshes the server should wait. 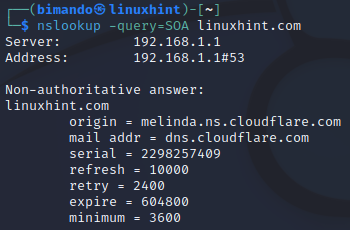 Enumerate the A record which is a DNS record that points a domain or subdomain to an IP address of the hosting server. 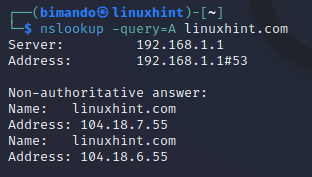 Enumerate the TXT Record. It is a DNS record type that is used to store information in the form of text on your hosting domain.

Whois and NSLookup are powerful information gathering tools in Kali Linux. It gives you so much detailed information about your target domain name. You should not skip this process because of several reasons. One, you are lucky if you could get open-public registrant information. Second, if you found that the target is behind a firewall, you need to evade or bypass that firewall. You would not set a firewall as your target, right?