The explanation follows the story line: A father has died and has left some money for his son. The son decided to invest the money in a convenience store. A convenience store, also known as a convenience shop, is a small retail business that receives everyday items from suppliers and sells them to individual customers in the neighborhood.

At this point, the shop is already stocked, and some sales have already been made. The son, who is the proprietor of the business, has some employees, who are called clerks in this tutorial. The proprietor and any employee can receive supplies and make sales after recording the products.

However, before the shop started, neither the proprietor nor the employees knew anything about normal forms. So, they were recording everything as transactions in one table and one exercise book. They did not have a computer.

The single or composite keys are underlined.

After summarizing what was taught in the previous two days and before you could do anything, the proprietor asks:

“What about phone numbers, addresses, etc., for customers and employees?

What about quantity in stock, reorder level, etc., for products?
Do they need their own separate tables, or should they be fitted into the present tables?”

You, the database developer, answer:

“Congratulations, Proprietor! You have indirectly introduced the issue of Third Normal Form.”

Other necessary columns are first added to the previous tables, which are in 1NF and 2NF. Some of the previous column names are modified.

As a minimum, the Categories table should have the following columns:

The description is a short paragraph that describes the category. This categories table is already in 1NF, 2NF, and 3NF. The 3NF is explained below:

As a minimum, the Products table should have the following columns:

As each product is being sold, a low level (number) of the products will be reached when the product has to be reordered, so customers should not come to the shop and not have the product. Such absence is not good for business. quantityInStock is the number of a particular product in stock. This includes what is in the store and what is on the shelf.

This products table is already in 1NF, 2NF, and 3NF. See why it is in 3NF below:

As a minimum, the SaleDetails table should have the following columns:

The discount value is expected to be zero most of the time. A discount is the discount the shop gives a customer.

As a minimum, the OrderDetails table should have the following columns:

The discount value is expected to be zero most of the time. The discount here is the discount the supplier gives the shop.

As seen below, the Products table may be considered in 2NF or 3NF. The Sales and Order tables have the issue of 3NF. Only the Sales Table will be used to explain the issue and solution. The 3NF for Orders Table and Products Table follow similar reasoning and would just be quoted.

While adding columns, the Sales table would be:

Seven columns have replaced the customer column in the original table. Since the customers are people in the neighborhood, the cells for the city, region(state), postalCode, and country columns, can be left empty, though they are not left empty in this article.

This Sales table is still in 2NF as both the 1NF and 2NF rules have not been violated. However, it should be realized that in a Sales table row, the customer (name) has been replaced by seven customer row cells.

Note: an address cell has the house number, name of street or road, and name of the town, all separated by commas. A city can be considered as made up of several towns. Though commas separate these particular string components, they form one cell value and not three cell values.

The employee column also has to be replaced by seven such columns. However, that is not done in this tutorial to save teaching time and space. So, a Sales table with data can be: 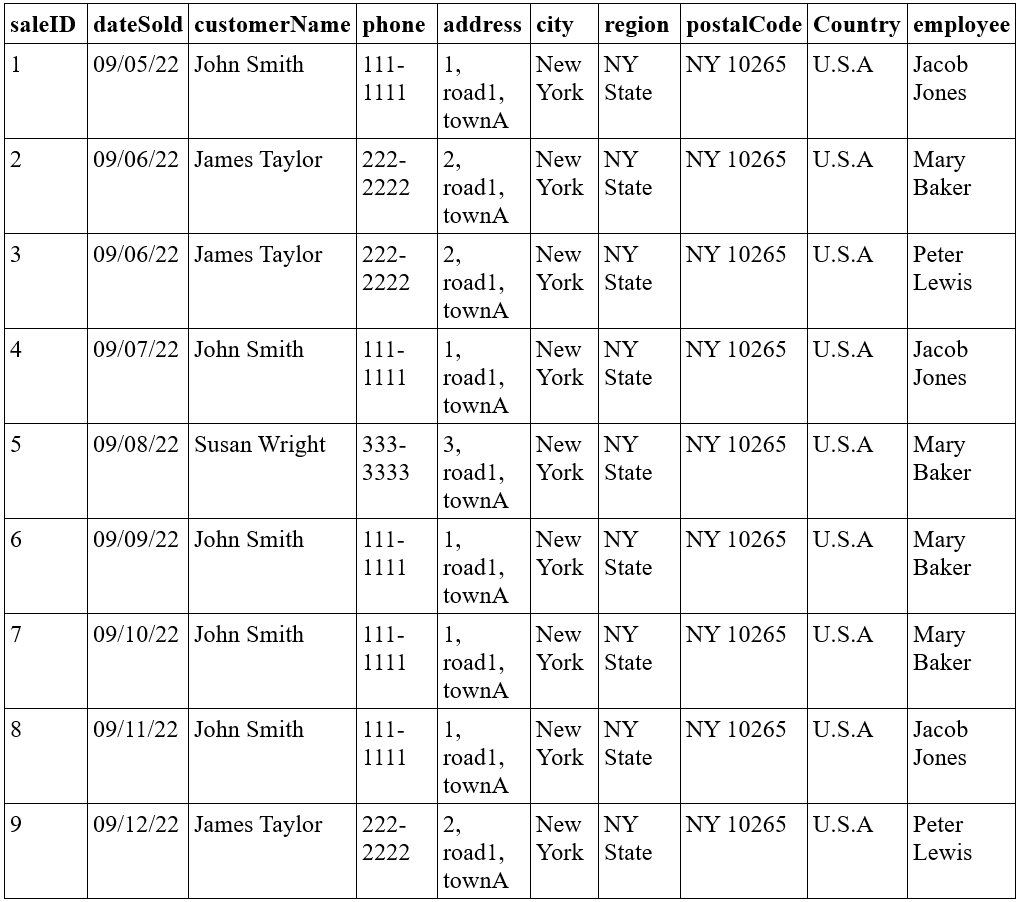 Note that for each row, customer (name), as was in the previous part of the series, has been replaced by seven cells, one of which is still customer-name. This means that customer data is an entity. Currently, the customer-name identifies its other six data in a row. If this table is programmed, it will be convenient to identify the customer entity in each row with an integer (not auto-increment). In that case, a customerID column should precede the customerName. The previous table becomes: 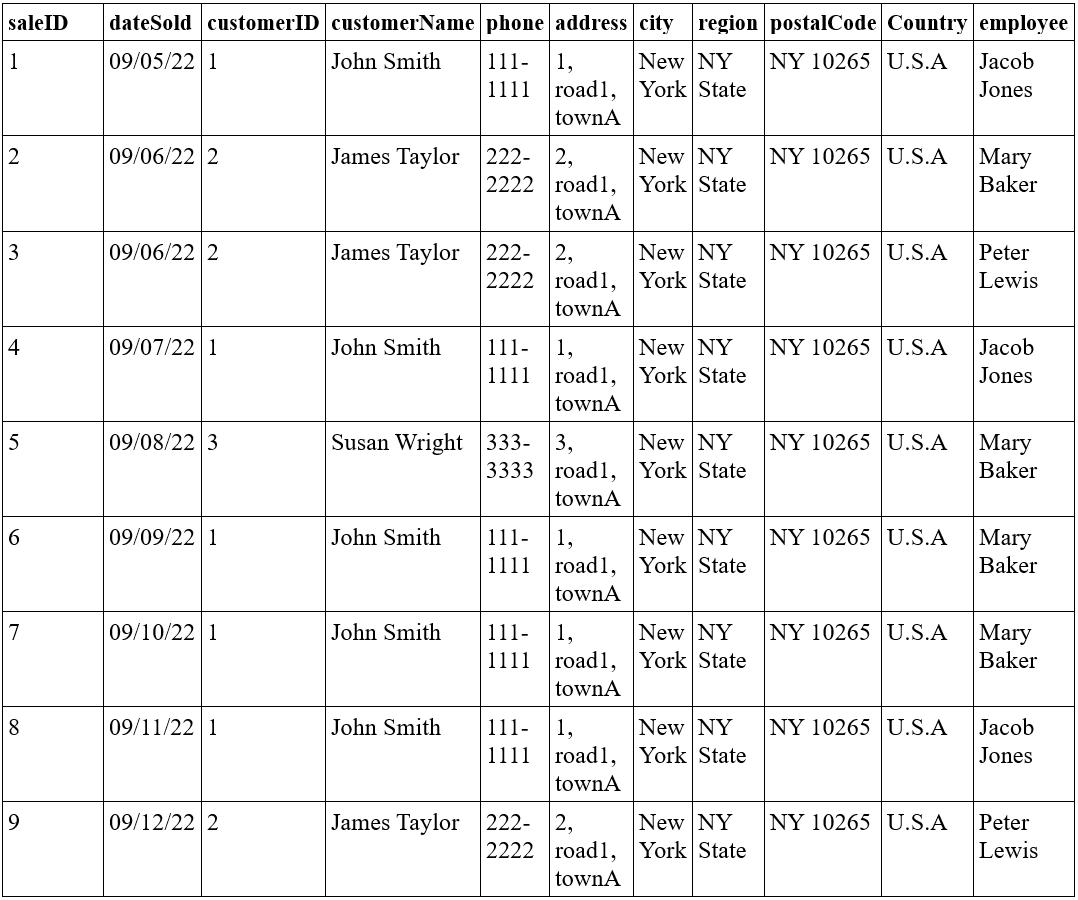 There are three customerIDs: 1, 2, and 3, with 1 occurring five times for John Smith, 2 occurring two times for James Taylor, and 3 occurring once for Susan Wright.

A table is in Third Normal Form if it abides by the following rules:

Then one of the clerks (employees) asks, “What is a transitive dependency?”. And you, the database developer, reply, “That is a good question!”

Such dependency for the custumerID is transitive dependency. And customerID is called a foreign key and is dash underlined in this tutorial series, The Five Normal Forms.

The previous Sales table with the foreign key and its dependees, would cause accounting problems (anomalies).

Sales Table From 2NF to 3NF 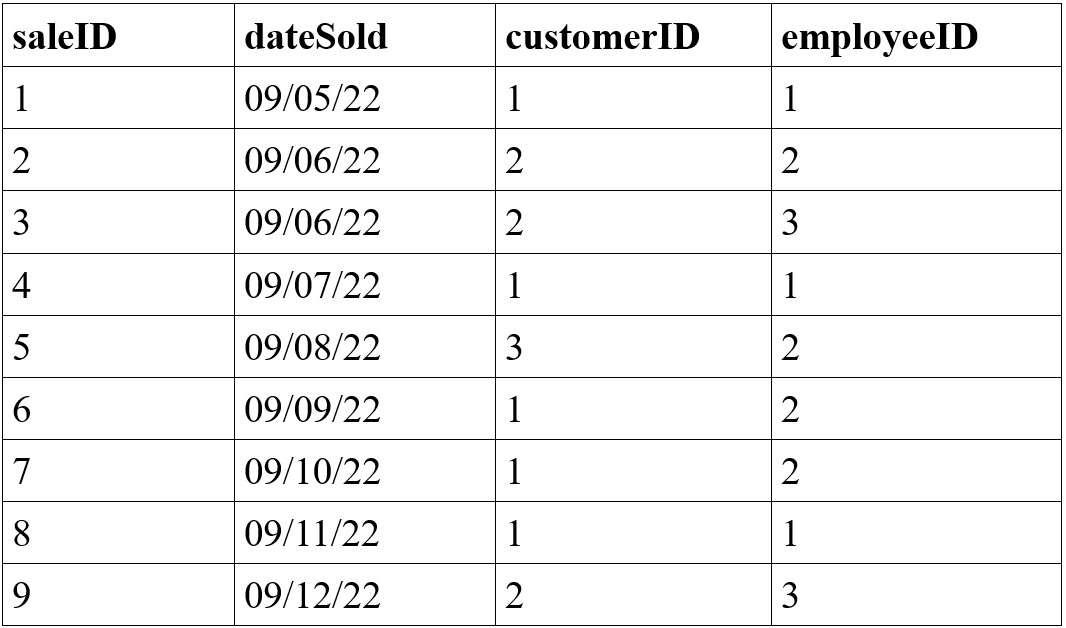 This table in 3NF has the same number of rows as the one in 2NF but with fewer columns.

The table notation for this final Sales table in 3NF is:

The relationship between saleID and customerID is many-to-one.

The customer table in 3NF

The repeated rows in the Customer table have been removed in order not to violate 1NF.

As the reader can see, putting a table in 3NF would also solve the problem of repeated rows (redundancy).

The table notation for Customers Table is:

The products table given above in notation form is:

All the tables are now in 3NF. They are shown as:

Up to nine professional tables have been produced from just one table produced by novices to prevent redundancy and accounting problems (anomalies from the insert, delete and update). The novice table alone would lead to financial losses.

Question: Using rules for 1NF, 2NF and 3NF, prove that all the above nine tables are already in First Normal Form, Second Normal Form, and Third Normal Form. The customers and suppliers do not have to be real entities. Data for tables should back up the table notations.

While they are completing the test, you, as the database developer, go out to have a snack and a beer, to return after one hour.

The Near and Far Future

While you, the database developer, are out, you also consider what advice to give them if they all pass the test.

Also, while you were training them, and now that they are taking the test, customers have been coming and leaving without being served. That is not good for business, and you, the database developer, know that. Some customers may go to the competitor shops and never come back.

When a table is in 3NF, most vulnerabilities have been removed from the database. Many commercial databases do not go beyond 3NF, and the firms or companies are comfortable.

So, if all of them pass the test, you will ask the clerks to go and continue working. You will also advise them to save parts of their salaries so that they can own their convenience shops. You will continue tomorrow to train only the proprietor in 4NF and 5NF. With the knowledge of 4NF and 5NF, all known vulnerabilities are removed.

After one hour, you, the database developer, come back. You mark their scripts. A piece of excellent news! They all, including the proprietor, have 100% each. Hurray! That is excellent!

So congratulations to all of you: the teacher and the students.

There is nothing left to do in this tutorial other than to conclude.

A table is in First Normal Form, if it does not violate any of the following rules:

A table is in Second Normal Form, if it does not violate any of the following rules:

A table is in Third Normal Form, if it does not violate any of the following rules:

You, the database developer, tell the clerks that they have learned enough. You provide advice and ask them to return to work and stay at their stations by default.

You set an appointment with the proprietor only, to take place in his office tomorrow for training on 4NF and 5NF.