Pi is denoted by the Greek letter ℼ. The mathematical notation of pi (ℼ) has the value 3.141592653589793. Given the widespread application of Python in the study of mathematics, its implementation of support for a variety of mathematical constants, including pi, is significant.

Python provides users with a variety of options for using the Pi constant. Importing a module is required for the majority of these different approaches though. In this guide, we will analyze the most often-used ways.

Now, let us play with some variables to perform some arithmetic operations with pi. To begin using the math library’s functions, we must first load it. In the next line, we save the value of the math library’s “pi” function in the new variable “a”. Next, we perform an addition of the variable “a” with itself and store the result in the variable named “b”. Then, we use the print command to display the value of variable “b” which contains the sum of the pi value with itself as shown in the following screenshot. The value at the output terminal is twice the value of pi, hence proved. 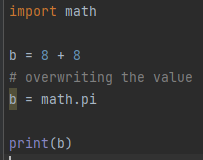 In this example, we will use a new math method, math.degrees(). It is a built-in function of the Python programming language that is defined within the math module. Its purpose is to convert the angle “x”, which is the parameter, from radians to degrees. For instance, the degrees function (degrees(x)) returns the degree value of an angle “x” radians. Degrees = radians * (180/pi) is the technique to convert the radians into degrees. To begin, we must load the math library to utilize the degrees() and pi functions. The degrees function is provided with the angle of value “pi/8”. This value is in radians. The degrees() function converts this value into degrees and returns the value in float data type.

The output comes out to be 22.5 which is correct (as pi/8*180/pi = 22.5) and it also verifies that the math pi function can be used as a whole expression and can even be manipulated using mathematical operations for calculations.

Now, let us do some more calculations with the pi method of the math module in Python. To begin, we must load the math module. In the next line of code, a variable for radius “r” is declared with the value of 2. Then, the value of pi is stored in the variable named “pie”. The formula of the area of a circle is implemented (area = pi * r * r) and stored in the variable named “area”. This gives us the value of the area of the circle of radius “2” which comes out to be 12.566 as shown in the following screenshot:

Another way to use pi in Python is to directly import pi from the math module by typing “from math import pi”. This makes a new object “pi” with the exact mathematical value of pi (3.141592653589793). To show this, pi is stored in the variable named “Val”. This variable is then shown using the print function. As we can see in the following screenshot of the output terminal, the exact value of pi is printed as 3.141592653589793

As we have seen in the previous example, by importing “pi” from math, we can directly use the constant “pi” in our program. This value of pi is saved in the “p” integer. The value of the radius is stored in the variable named “r” as 3. These values are used to calculate the value of area through the formula “pi * r * r” and the value is stored in the variable named “area”. This number is presented in the following image using the print function. In this example, we can see that even by directly importing the function from the math library, we can use it in expressions to produce calculations-based results.

Similarly, we can calculate the circumference of a circle by directly importing the constant “pi” from the math library in Python. In this example, the value of pi is stored in variable “p”, and the value of radius is stored in variable “r” as 3. Using the formula of circumference “2 * pi * r”, the value is calculated and stored in the variable named “circumference”. This value is displayed at the output terminal using the print command as shown in the following screenshot. This example further solidifies the use of the pi function when used by directly importing it from the math library.

\
This article only delves into the pi method out of the many helpful mathematical functions available in the Python math module. It is a very useful method for applications in which we need to compute the exact constant value of pi. But as we know, the exact value is a very long decimal number and it can be very time-consuming and tiring to type this value. Also, there is a high chance of error while typing its value which can result in inaccurate results. Python makes it easy for us as it has defined many constants in its math library, one of them is pi, to easily compute the exact constant values in different equations to solve the various mathematical tasks. We hope you found this article instructive in understanding the Python math module and its pi method.