We have created the java class “example1,” which is publicly declared. Inside the class “example1”, we have the main method implementation. Here, we have defined the string variable “My_Str,” which contains the string of words. Then, the java system.out.print method is employed with the substring method. The substring method takes the index value “15”. The substring extract from the “My_Str” starts from the index character “15”.

The console screen displays the substring that is obtained from the specified string in the above program.

We have defined the java class “example2,” where the main method of the program is performed. Here, we have initialized the string inside the variable “Str_Value”. We have two strings, “example2” and “java,” within the string. We have to obtain the substring from these two strings. For this, we have defined the “Begin” variable where the indexOf method is utilized, which searches the first index string.

We have also fetched the length of the string because the character at the end of the string, “example2,” is required. Likewise, we have searched the initial index of the string “java” inside the variable “End”. Then, we invoked the substring method and passed the “Begin” and “End” variables as input to acquire the substring between both indices. The “Str_Result” will print the substring to the console.

We have got the substring as follows from two strings by specifying the start and end indices. 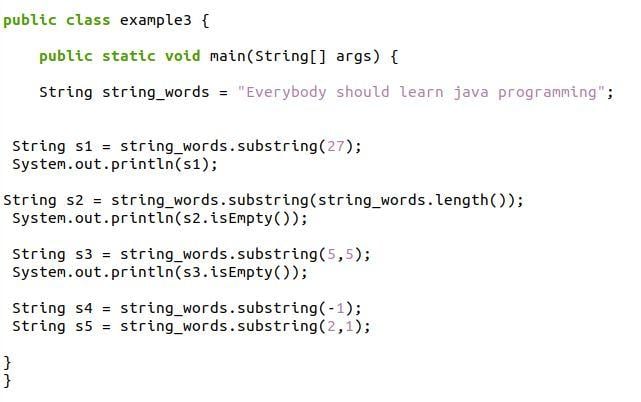 On the other hand, we have provided the “s5” substring method with the start index “2” and end index “1”. As the “2” is greater than “1”, the substring will return an “IndexOutOfBoundException” to the console.

The results of the above case scenarios of substring are displayed on the console as follows.

The substring method can also be used to determine whether the specified string is a palindrome or if it can be viewed in an equal direction from both ends. 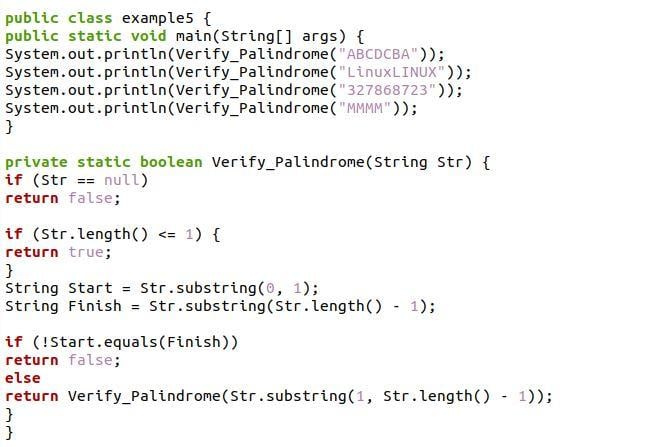 The java class “example5” is constructed in this particular program. Then, we have the definition of the program’s main method. At the beginning of the main method, we have initialization of multiple strings, which are defined in “verify_palindrome” simultaneously. Next, we have constructed the “Verify_Palindrome” function with the boolean data type. The results from the “Verify_Palindrome” will be printed as true or false.

Here, the function “Verify_Palindrome” takes the string object as “Str”. Within the function, we have used the if statement, which checks whether the string is null or not. We have checked the string length should be greater or equal to a value of “1,” which is also considered a palindrome within the second “if” statement. Then, we have the usage of the substring method, where we obtain the initial and last character of the string.

The last “if” statement verifies the palindrome with the condition that the start and end index is equal or not. If they are not the same, we removed the first and the last letter from the substring and then repeated the process to verify the palindrome. The “return” statement will provide the next recursion results.

The following are the Boolean values that determine which of the provided string is a palindrome or not.