“Pip is the most popular package installer for Python. You may manage and install new python-based software packages using PIP, a Python command-line package manager. However, users can install its dependencies and do package searches in the Python packages index using this tool. Most Linux operating systems do not come pre-installed with the Python pip tools. Fortunately, you can manually install the python-pip tool on Debian and other Linux distributions.

Today, we will show in this article how to install python-pip packages on the Debian 11 bullseye distribution through the command line application. Almost all steps are similar, so by following these guidelines, you can install python-pip on Ubuntu and its derivates.”

How to Install Python Pip on Debian 11 Bullseye Distribution?

Python has two different versions, python2 and python3. But, the pip installation in Python2 has been obsoleted now. However, you can install pip for Python3, which is available in all Linux distributions. Open the terminal from the application menu using the search bar:

Now, perform the below steps to start the installation of a python-pip on the Debian 11 system:

How to Install Pip for Python3?

The following steps are included while you are installing the pip tool for python3 on Debian 11:

Step 2: Verify Python Installation
Python3 is installed by default in Debian 11 and other major Linux distributions. So you don’t need to install it again. But, ensure the Python3 installation by executing the following command:

The installed version will be displayed on the terminal. Now, start installing the pip tool for Python3.

Step 3: Install Pip for Python3
Execute the following command to install python-pip tools along with all dependencies on Debian 11 bullseye distribution: 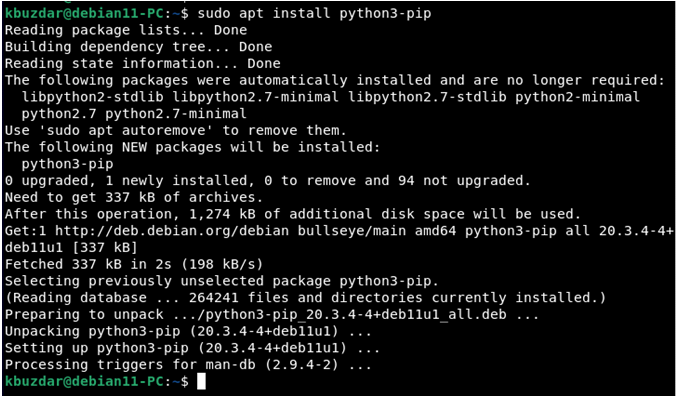 How to Use Python Pip in Linux?

We will also explore the use of pip in this article. Using pip, the user can install python packages from PyPI, local projects, version control, and other project distributions. Usually, the pip would be used inside the virtual environment. Python virtual environment allows you to install python packages inside an isolated space without disturbing the other python project modules.

With pip, you can list all packages as follows: 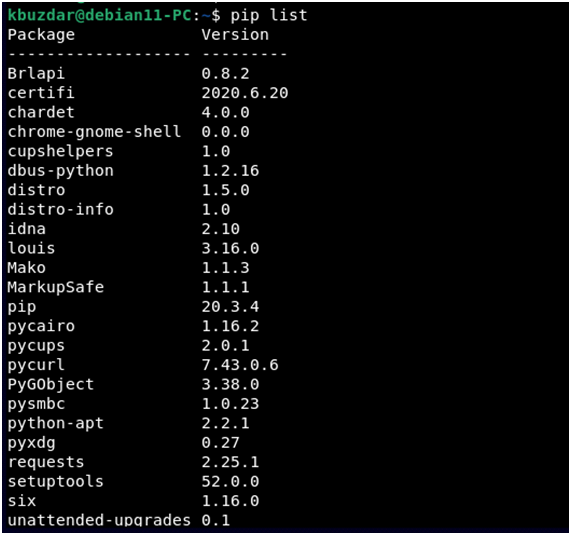 You can search for a package through pip by using the following command:

With pip, you can install a python package from PyPI as follows:

For example, we want to install a python package “scrapy” through pip. So, the following command you need to enter on the terminal:

You can also display the package information by using the following command:

The following command you can use to remove or uninstall a package through pip3:

To uninstall the scrapy package, run the below-mentioned command:

That’s all about the basic commands of the pip tool. To explore more commands and options about pip, run the following command on the terminal:

All pip commands and options will be displayed on the terminal as follows: 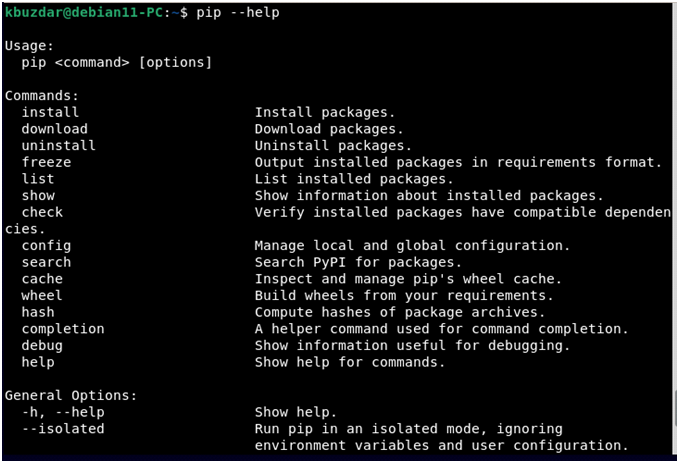 How to Uninstall Pip From Linux Debian 11 Distribution?

You can uninstall the python-pip package manager from your Linux system by using the following command:

The above command will uninstall pip tools from your system. You will see this output on the terminal:

In this article, we learned how to install the python-pip tool for python 3 on the Debian 11 bullseye system. We have executed various commands to understand the use of pip. Moreover, we have also explained in this article the use of the pip tool. I hope using the above guidelines; you can now easily install and use python-pip tools on your Linux system.