How to Install Rhythmbox in Ubuntu 22.04

Rhythmbox is the default music player in Ubuntu. The music player has a friendly interface and works with the GNOME desktop. You can still use it with other environments, and the installation is straightforward.

Rhythmbox allows customization of its user interface and other preferences to achieve a better user experience. This guide covers the steps to install Rhythmbox in Ubuntu 22.04. Take a look!

There are plenty of benefits that come with using Rhythmbox. For instance, Rhythmbox supports radio streams, internet music services, podcasts, and network shares. The latest release of Rhythmbox is 3.4.6.

Before installing Rhythmbox, start by confirming the currently installed version.

You might notice from the previous image that the default Ubuntu repository doesn’t offer the latest update for Rhythmbox. To get the latest version, you must add the Rhythmbox PPA.

Once you add the repository, you have two options to install the latest Rhythmbox update.

Alternatively, you can run the following command, and the latest Rhythmbox package will be installed in Ubuntu:

That’s it! Once the installation completes, you will have Rhythmbox v3.4.6 running on your Ubuntu 22.04.

Go ahead and open the Rhythmbox from your installed applications.

Once the application opens, you will get an interface like the one in the following image. You can then use it for all your music activities. The interface is simple and you will quickly work around it.

Besides, you can open the preferences tab and customize the Rhythmbox as you see best. Feel free to open each tab to check which features you can modify for a better music experience. 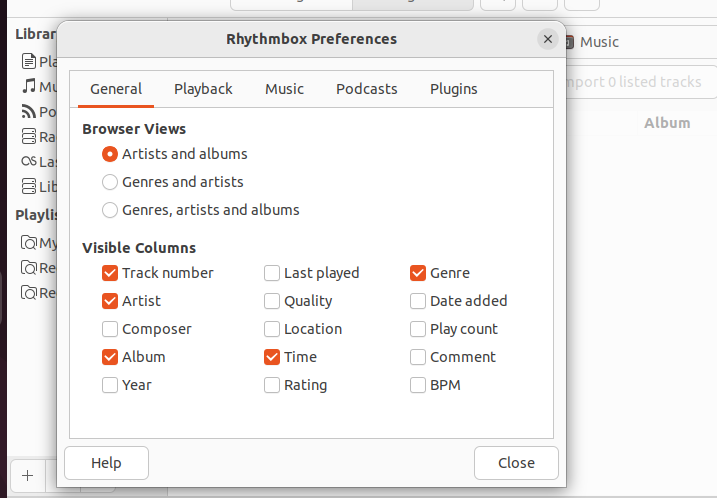 Note that Rhythmbox is also available in the Ubuntu Software Center. However, that doesn’t install the latest version. Nonetheless, you can open the software center and install the Rhythmbox by clicking on it.

How to Revert to Previous Release

If you encounter some errors when using the Rhythmbox version which is installed via the PPA, you can revert to the previous release which is available on the default Ubuntu repository.

To revert, execute the following command:

The command installs ppa-purge and uses it to revert to the previous release.

You can then remove the Rhythmbox PPA that we added using the following command:

With the PPA removed, you can resume the Rhythmbox which is available in your Ubuntu. Updating and upgrading your Ubuntu packages will also update the Rhythmbox music player, only that it might not fetch the latest version.