How to Import Classes in Java

“The concept of “class” must be known to almost any person who has gone to high school at least once in their life. In programming languages, a class is used to store elements with similar properties. It is used as a “blueprint” that can construct objects. A class is a combination of objects, variables, and functions. There is a certain way to define and import classes in different programming languages. Within this guide, we are elaborating on the syntax of importing the user-defined custom classes and the built-in class in a java program.”

To import any sort of class or static package in the specific Java program file, you have to memorize the below-shown syntax of the Java code. This syntax starts with the Java keyword “import,” which is being used to import any package or a Java class. After the keyword “import”, you need to specify the name of a package followed by the name of a class to be imported from your Java language, i.e., Java.util is a package, and the “Scanner” is a class within it.

While using this first illustration, we will be discussing a way to import built-in classes. Thus, we are working in the Eclipse IDE Java tool, where we have created a file “test.java”. In this Java file, we are going to get some input from the user and display it on the Eclipse console after importing the respective input class. Therefore, we have imported the “Scanner” class from the “java.util” package of Java programming.

The very same syntax has been used in this example that has been explained in the above paragraph. The “Scanner” class is a built-in Java class used to perform some input and output operations. After the class import, we have defined a custom user-defined class “test” that contains a main() driver method in it. The main() driver method starts with the initialization of a Scanner class object “t,” taking the “system.in” package in its output to specify that it is going to perform the input operations.

A string variable “V” got defined, and the “System.out.println” statement was tried out to ask a question from the user: “What is your name?” on the Eclipse IDE console. At the 8th line, we have been calling the nextline() function by making use of the Scanner class object “t” of Java to get the input from a user and save it to the string variable “V”. The last “System.out.println” function statement will print the “V” variable value at the same console. The program’s main() method of class “test” is completed here. To run this program, use the “Run” icon from the Eclipse IDE taskbar.

The output screen displays the question: “What is your name?” as shown. The user inputs their name and hits the “Enter” button, i.e., “John”. The string value of variable “V” got displayed.

Let’s take a look at another Java example to use the built-in class. In this program, we are going to import the whole Java package along with its classes and interfaces using the “*” character instead of the class name, i.e., “java.util.*”. The “test” class has been started with the main() function that has been creating an object “s” for the built-in class “Stack”. This class is used here to create a stack of data.

Using these object “s”, we are inserting and deleting the integer elements from the stack, i.e., “push” to insert and “pop” to delete. The “pop” function only pops the last inserted item from the stack. In the end, the remaining stack elements would be displayed via the println() function statement. Let’s run this program now. 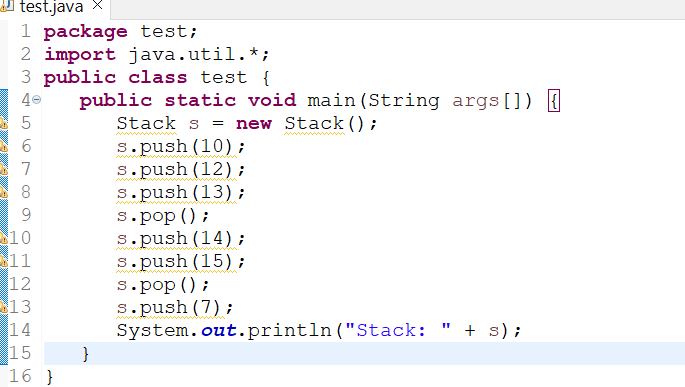 On execution, the output shows only the 4 elements left in the stack.

This example is going to elaborate on the method of importing the custom or user-defined class in Java programming. For this, you must have two Java files created in the Eclipse IDE. These file names are going to be our class names. The first file, “info.java,” contains an implementation of the user-defined class “info” after the import of the built-in “Scanner” class from the “java.util” package. The class “info” is initializing an object “s” of the Scanner class to make use of input operations in this program via the “System.in” package.

After this, two variables are defined, i.e., the string type “Name” variable and the integer type “Salary” variable. The getter and setter functions are used here. The getN() function asks for an input name from the user using the “NextLine” function and saves it to the variable “Name”. Then, it will return this value to the main() function. The sent() function is used here to set the value of the mutable “Name”. In a very similar way, the getSal() is the getter function to get the value for the integer variable “age” from the user using the nextInt() function. After that, this value would be returned to the main() function of the other file. The setSal() function sets the value for the “Salary” variable. 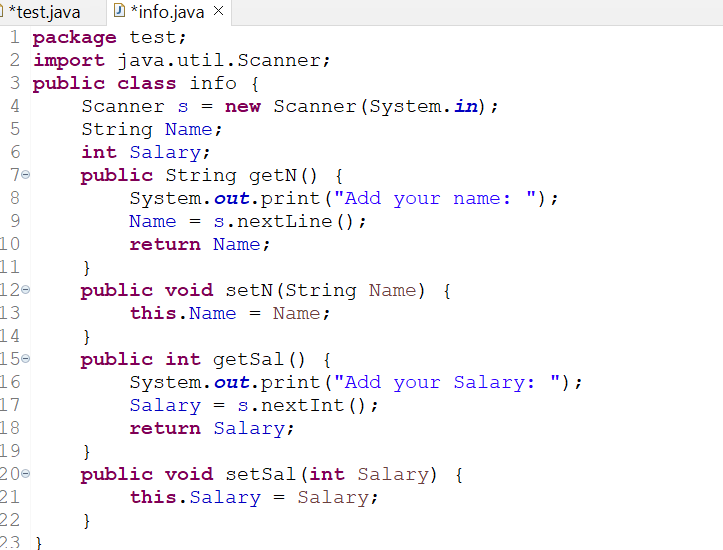 Now, the other file, “test.java,” contains the import statement to import the “info” class from the “info.java” file. It starts with the “test” class holding a main() function. The object “t” for the “info” class was created and utilized to call the getN(), and getSal() functions here to display the respective input values.

This is how you can import the user-defined custom classes in Java. The user inputted the name and salary, and it got exhibited as well.

This article explains the use of classes in Java programming, followed by an explanation of the syntax used to import the classes. For this, we have explained the way of importing built-in classes of Java in the first two examples, i.e., by importing and using the Scanner and Stack classes. After this, we have explained a way to import a custom class in a Java program, i.e., defining a class in one Java file and importing it to another Java file.