Beginner Tutorials – What is a Git Repository?

Git is a version control system to stage all changes made in the development project files and folders. After that, store them in the Git local repository. Developers can perform multiple operations, such as creating a new repository for ongoing projects, copying the existing directory, or deleting the new and existing directories.

This blog will illustrate:

What is a Git Local Repository?

A Git repository is used to update and store the history of all modifications in source code in the development projects. It saves this data in a Git repository called “.git”, which is also known as a repository folder.

How to Commit Changes in Git Local Repository?

To commit changes, first, we will move to the Git directory and initialize it. Next, perform the operation of creating and adding a file to the local repository. Then, execute the “$ git commit” command with the “-m” flag to commit changes.

Run the “cd” command to navigate to the desired repository:

Next, create a new file using the “touch” command:

Add the newly created file to the staging area through the provided command:

Add changes to the Git repository by executing the “git commit” command with “-m” flag: 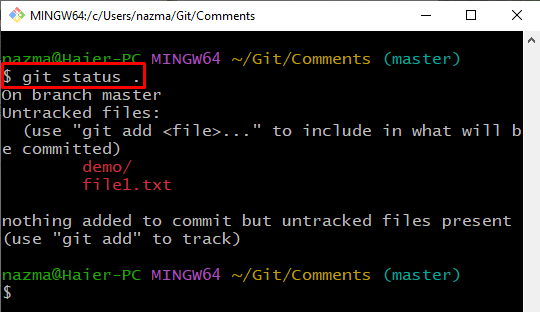