A simple logic behind SQL database relies with his name Structured Query Language, where SQL manage to reform data efficiently into a specific structure e.g., rows and columns and store them into a database. Different databases have been introduced for multiple OS, but the one that supports SQL database on Raspberry Pi are presented in this article for user’s easiness.

Though there can be multiple database that supports SQL databases, however the below-list presents top 5 SQL databases that can easily be installed and configured on Raspberry Pi system.

A multi-threaded, simple, user friendly, and open-source relational database is presented with the name of MariadB. This database is a great replacement of MySQL, which no longer supports Raspberry Pi system. Its main feature is to authenticate all hosts that lie under the umbrella of MariaDB by giving specific and limited permissions to all hosts. The multi-threaded feature of MariaDB remarkably structure, handles, and manage the large data in a very quick manner. Additionally features such as re-arrangement, formatting, and scaling of large data along with offering encrypted security to all user data. All these features are handled with a standalone MariaDB database system.

The Installation and configuration of MariaDB database server for Raspberry Pi device can be found on this article.

Postgre is another most advanced open-source relational database that utilize SQL to structure data and provide a connection for a user to the database server. The impressive interface and built-in libraries can support and build mobile and other OS applications. Due to the open access of this database, you are free to create and design own custom feature, functions, data types, and even write code in a different language without recompiling your database.

If you want to install PostgreSQL on Raspberry Pi device, then all instructions including configuration of PostgreSQL database can be seen through the following link.

Another SQL based relational database is name as Firebird, where it offers variety of features of ANSI SQL, and support almost all Unix OS. The main features are to provide multiple computations at the same time with excellent performance. Additionally, features extended into the ability to support languages and user-friendly GUI interface enables Firebird to store and retrieve data very efficiently.

It can be installed on Raspberry Pi system from the following command: 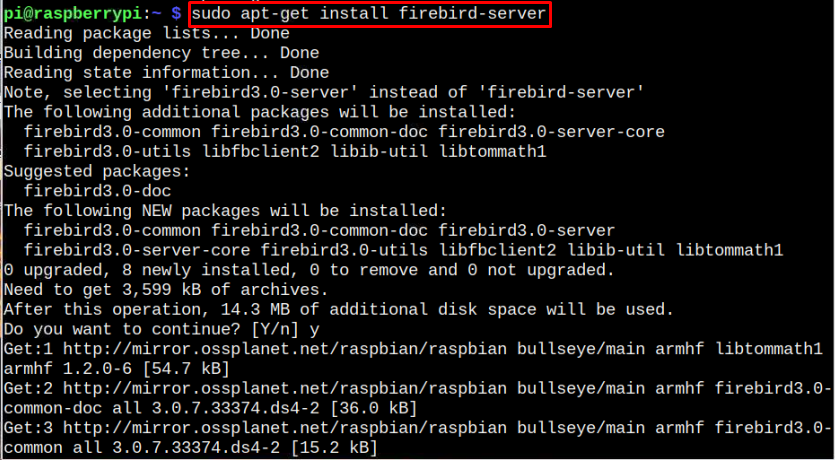 SQLite is one of the lightweight, open-source, and relational database system that usually comes with built-in C-Programming language. It is considered to be a light version of MySQL because most of features are skipped and designed only for mini projects. One of the versatile features of SQLite is that it cannot access the server or TCP/UDP/IP protocols, rather it directly handles the database file. This serverless feature make the SQLite easier to configure with the system. Further, SQLite requires very less support from third party libraries, this makes SQLite operational for any device.

Based on these features, we are confident to say that you can easily configure and install SQLite on Raspberry Pi device, and this can be accomplished by using this link.

One of simple yet powerful, secure, and SQL-based open-source relational database server which was introduced by the Microsoft Corp. is named Microsoft SQL Express. The primary function of this product is to store and retrieve data from the main database server using a user computer or remotely accessed across a network by a user from anywhere in the world. Different available flavors of Microsoft SQL attracted audience to use this product for small to large internet applications.

To store desired data on some database in a structured way, we prefer to use SQL database. The SQL improve data arrangement by given instructions from a specific software and then storing them in the database. The top 5 MySQL supported databases are presented in the above-mentioned guidelines with the installation instructions. It’s up to the user, which database they want to work on Raspberry Pi system.